Invisible hands? European corporations and the deforestation of the Amazon and Cerrado biomes

The report “Invisible hands?” offers a survey of the involvement of European firms – including banks - at different stages of the supply chain of soy, meat and metal – industries which are the main drivers of the deforestation in Brazil.

Euro 2016: Nike and Adidas Dodge “Social Responsibility” in their Quest to Pay the Bare Minimum

How many Vietnamese workers is Cristiano Ronaldo worth, according to Nike? How many Chinese workers is Adidas’ sponsorship contract with the German team worth? Global sportswear brands have spent massive amounts on advertising and sponsorship for the Euro 2016 championship. Basta! and Alternatives économiques investigated what happens at the other end of the chain, where workers make shoes or jerseys for players and their fans. Despite the rhetoric about “social responsibility”, these major brands are still engaged in a race to the bottom. They are now leaving China – where wages are on the rise – for countries with even lower “labour costs”.

How One French Town Combines Welcome for Migrants, Ecology and Social Emancipation

Grande-Synthe, in the north of France, is one of the very few French towns that welcome hundreds of migrants with dignity and respect. Despite 28 percent unemployment of its active population and a third of households living below the poverty line, Grande-Synthe is also a place where ambitious environmental and social policies are conducted. Mayor Damien Carême and his team support a popular university in the service of the town’s residents, have created the first renewable energy stadium in France and are building an eco-neighborhood accessible to the poor. Their political resolution is compounded by solidarity with refugees en route to the United Kingdom, making the experience of Grande-Synthe’s refugees very different from the fate reserved for migrants in Calais’ nearby seedy shantytowns.

Half of World Heritage sites are currently threatened by industrial development, and the oil and mining sectors pose a particular threat. So many invaluable sites and biodiversity sanctuaries face being wiped off the map just because we are unable to do anything about our voracious model of development. Several French transnational corporations are among those involved in projects that could herald the end of these exceptional sites. Some of the sites facing destruction include national parks in Africa, the Arctic islands, virgin forests in Asia, and the Amazon Basin.

The large majority of France’s car fleet runs on diesel, despite its lamentable health effects and the enormous costs involved for society. But who is to blame? Since the eighties, political authorities, industrial figures and transport professionals have persistently backed the diesel engine even though its emissions have always been recognized as extremely harmful – and even carcinogenic. And the evidence continues to mount against it. But the French government recently announced an increase in the price of diesel. After thirty years going backwards, is there hope that things will finally change?

With community input, health centers in France experiment with a holistic model

Within the last few years, a little network of health centers unlike any other has been forged all through working-class neighborhoods in France. “Health Space,” “Health Square” and “Massilia Health System” are all projects conceived by social workers, doctors and residents who want to prove that it’s possible to provide health care in a different way, without endless prescriptions and assembly-line consultations. With a leitmotif: If health is determined by the social environment, then access to social rights and services is as important as health care. If it gets financing, this promising model could well have a significant impact.

More than a third of prisons in France are partly run by private companies. The trend towards privatising the prison system, which began three decades ago, is gaining in momentum. A handful of companies are capitalising on this very lucrative market, providing services that include catering, receiving visitors, building detention facilities and organising prison labour. The French state spends almost six billion euros a year on these services even though the benefits of private management are highly questionable. This rampant privatization trend raises another thorny question: do private companies not have an interest in keeping prisons full? 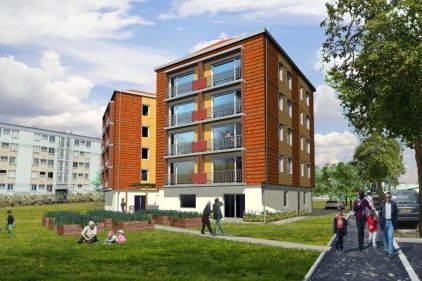 In France, a retirement co-op ensures seniors are not treated as commodities

They didn’t want to end up in a traditional retirement home. They wanted to remain the actors in their own lives. Seven years after their first discussions about how to age well, a group of retired people is starting to build the first co-op for the aging. Non-speculation, democracy and environmental concern are the foundations of the “Chamarel-Les Barges” project, located in a neighborhood of Vaulx-en-Velin, east of Lyon, France. The project is so inspiring that the bank has even conferred a 50-year loan to the founders, who are in their 60s.