In the North of Paris, the Carton plein association collects, cleans and sells discarded boxes. People in precarious situations recycle, deliver by bike and help move – gaining professional and life skills in the process. 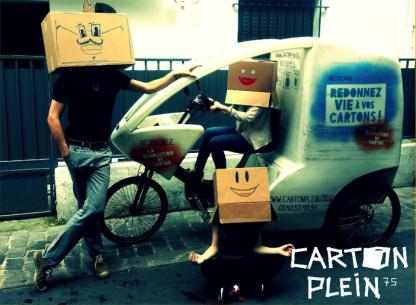 It all began with Francis, a rag man who makes a living reusing and recycling things. He was peeved by the heaps of empty boxes that are dumped on the streets of Paris. “The yellow bins for paper and cardboard aren’t big enough for all the stuff that people throw out,” he says. “The city doesn’t have the resources to deal with the problem. There are some companies that take care of the problem, and it works out because the demand is there.” He and his friend Antoine Aumonier decided to collect part of these boxes to compact them into smaller bales and resell them.

They invested in a compacter. Yet the project was off to a rocky start: The machine cost several thousand euros, the boxes took up a lot of space, and the compacted bales didn’t sell well. “They also thought it was a pity to crush perfectly fine boxes”, says Hélène, a volunteer for the association that Francis and Antoine founded following their difficult launch. The project turned a corner: They now collected boxes from private citizens, associations and companies in order to clean and reuse them.

So now, 33 rue du Nord in Paris is home to the unusual store of the Carton plein (‘full box’) association. You can buy boxes here –– individually, if you just need to store some unused items, or in bulk for a major move. The recycling program is also meant to be a social endeavor, for some team members are in a process of social reintegration. And who are the clients? “People from the neighborhood often come to the store to buy a couple of boxes at a time, but most of our business is online,” Hélène explains.

The guys who start working here have traveled a rough road. Severe addiction, major health issues, sometimes several years of homelessness. “These are people in very precarious situations for whom the regular job reintegration programs are too regimented,” Hélène says. “Here, they work between three and six hours a week. It’s a step towards working longer hours at a later point.” Carton plein uses a program funded by the city of Paris that issues work contracts with very short weekly hours, allowing people to get back on their feet gradually.

About fifteen ‘valorizers’ are currently benefiting from this program. This number should double soon, because a second site is scheduled to open in the south of Paris. This was made possible by a crowdfunding effort. Other than the hard cases, the program also serves people with lesser worries. “They just need to perfect their French or have a first work experience to boost their resume for future employers,” describes Geoffrey, one of the association’s three full-time employees. “They lack self-confidence.” These very diverse backgrounds also mean that the success of the program varies greatly depending on the individual. “Some go on to pursue vocational training, find a job and manage to get a handle on their lives. Others disappear from one day to the next.”

What do those who stay take away from the experience? “They learn that work requires discipline,” Hélène believes. “That they need to show up on time and sober, follow instructions, work in a team.” Some of them are on the delivery team, which fosters a whole set of skills. Loading the delivery bike is not an easy task. Then you have to read a map, find your bearings around the city, time your routes and work with the customers. Geoffrey takes out an old laminated map of Paris, adding: “You learn to read French, to figure out the dead ends and the through streets, you end up discussing a historical term like Faubourg – that is a teachable moment right there.” Biking with a decent amount of cargo also means getting exercise. And all of that without undue stress.

In the workshop next to the store, two ‘valorizers’ are busy pulling boxes from a stack that is piled up all the way to the ceiling. They peel off the tape and labels and sort the boxes by size. A portion of the boxes will be delivered by bike. Customers like the environmental aspect, the social implications of the project, and the price of the boxes, for they are only half of what a new box would cost. Three employees manage the workshop: a director, Do Huynh, and two assistants – Geoffrey is in charge of all things technical and François takes care of the social side. Geoffrey manages deliveries and the material, especially the bikes. He also trains the ‘valorizers’ to deliver the boxes. François mentors the employees in terms of their social reintegration; he keeps tabs on their health, their dealings with authorities, their search for housing …. And their professional outlook beyond the boxes.

Half of the operation is self-financed by the sale of the boxes. The rest comes from subsidies and other forms of public funding. Several foundations also support the project: Macif, Caritas, Société générale. The current boom of socially assisted moves should also help the project gain more financial independence. “Recently, we also started offering moving help,” Hélène explains. “In general, for people who move all by themselves, and need a few more hands than they anticipated.” They charge by the hour, in contrast to commercial movers who charge by volume. The service offered by Carton plein is performed by people in social reintegration programs – another opportunity for them to learn new skills.

The atmosphere in the workshop and the store, where you can also stop for a coffee, is friendly. The ‘valorizers’ like to stop by outside of their work hours. “Our welcome is unconditional,” Geoffrey says with a smile. “Those who finish their contract with us and still need a little social support come to see us. Others come back to volunteer. We keep them close.”

Translated by Kerstin Trimble for Goethe Institute. Initially published in french by Basta!.